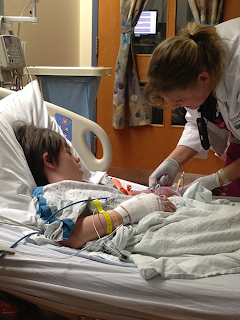 A photo of my son in the hospital recently. He was diagnosed with Type 1 Diabetes on April 5th. His glucose was 912 when he was brought into the hospital.
He watched them do every blood draw, accu check etc. They were testing and drawing blood every 2 hours for the first 12 hours. Then it went to 3 hours. He had been picked so many times. Poor Guy! He got used to it, best as anyone can. They would come in with his insulin and he would tell them where to give the injection. He always remembered where the last one was given. LOL For those who know him, that is a big thing for him to remember that.
Now he’s been on the other scale of it, on the low side. His numbers have been 32, 54, 51 at night. I’ve had to physically wake him to get some juice etc. in him the last couple nights. He sleeps right through the testing. For the most part he is doing well.
This mom can’t be happier!
Have a Great Day!
Michelle
(Visited 457 time, 1 visit today)