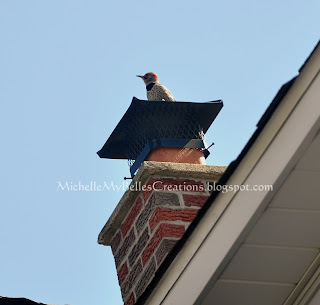 One morning recently while our furnace was running, we hear this loud noise, like a jackhammer coming from the chimney in the house. It was very loud! I said to hubby it sounds like it’s the furnace. So we both head down to the basement and sure enough it sounded like it was coming from the pipe exiting the furnace going into the chimney. We had so many errands that day and I was afraid to leave the house because it’s a gas furnace. So we called our plumber and heating guy.
He was out within the hour. We had to turn the thermostat up so the furnace would run, to try and duplicate the sound. It was like a sauna in our house. Well of course no luck, he could not find anything. He then started taking things apart. Still nothing. So, after 1 1/2 hours later he put everything back together and was on his way. The charge $125.00.
Now this was a wed. morning, we had been gone most of the day and then came home to a message my mom was in the hospital. So we were back in the car again driving to the hospital, got home about 9:30pm.  We didn’t know if the furnace made any more noises because we were not home all day. Thursday night about 6:45pm, hubby had his shower and was reading, trying to relax because he had to be up at 3:20am the next day. The noise started again, the cats are scrambling and don’t know which direction to run. It was hilarious. So back down to the basement we go. We both looked at each other and were like what the heck. It was doing it at intervals and then would stop. He said let me go outside and see if a bag or something is caught on the chimney cover and is causing the vibration. It had been so windy the last couple of days.
So out he goes, and this is what he saw. A Northern Flicker Woodpecker!  I had to get the camera. LOL You can’t imagine how loud it is in the house. Outside it’s only a light tapping sound, inside it’s like a jackhammer. Never imagined it would be a bird, LOL
But the story does not end there, LOL For the next couple of days, every morning he’s on the cover hammering away at 6:30am and 6pm at night. Because the weather was so nice our furnace did not run. By Fri night the temps were getting cold again, in the 20’s. The furnace was not running, the house was really cold. Sat. morning it must have been 40 in our house. I call out the heating guy again, this time he sends his brother. It was a sat. and Easter weekend. The brother comes out and does not have his work truck, he was walking his dog and thought maybe the other technician did not turn the switch back on. So, back home he goes and gets the work truck. He is down in the basement almost 2 hours and can’t find the problem. Is on and off the phone talking to his brother trying different things. Then he finds the problem. Because the heat was jacked up so high the first time, trying to duplicate the problem, it burnt out one of the switches. Well, of course he does not have one and needs to order it. So, we had to wait until Monday morning and were without heat for the weekend.  All of this because of a woodpecker!! LOL
Twice a day he is up on the pipe hammering away. I hope he stops this soon.
Have a great day
Michelle
(Visited 425 time, 1 visit today)