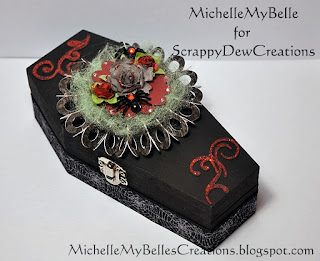 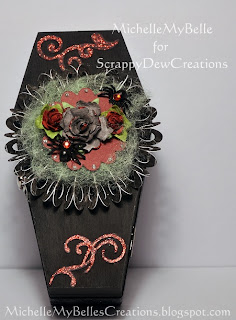 Today I’m going to share another Halloween project I completed. I have been wanting to make a coffin for some time now.

I started out with a purchased box from Micheal’s and painted it black.  I cut 2 flourishes out and added red Stickles to them and set aside to dry. Next I worked on my Rosette Flower. I cut the Rosette, and a scallop circle. I had some extra webbing around the house since I had been decorating and hot glued it to the Rosette. I attached my scalloped circle and applied some Ranger Liquid Pearls and set aside to dry. I added some Stickles to the roses and worked on the little spiders next. They were also a left over decoration and I was wondering what I could add to them, so I put some little rhinestones on them. 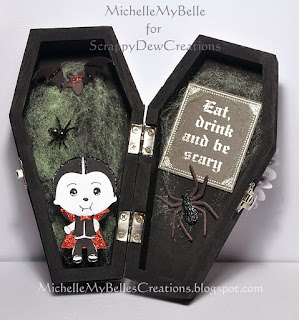 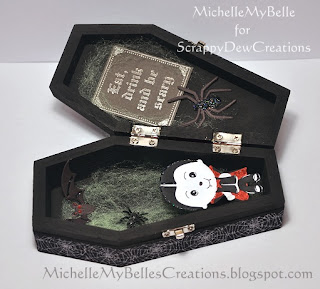 While all that was drying I started on the inside. I cut my Little Vampire from the Halloween Palz
and assembled him. I chalked him but you can’t see it in the photo. Once assembled, I added some Stickles to the cape and then to his hair and set aside to dry. I cut the spider and the bat from the Cuttlebug Dies. I added some Stickles to them also and set aside. I glued some webbing to the inside of the coffin. 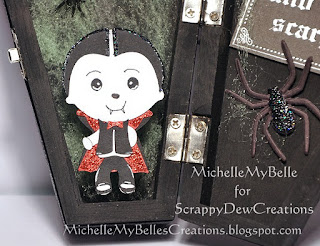 I applied some ribbon to the bottom part of the coffin using double sided tape. Next, I finished the Rosette by attaching the roses and the spiders, then hot gluing it to the top of the coffin.

The Vampire is suppose to be holding a bat, but because he is only 2 inches tall my Expression would not cut the bat properly. 🙁