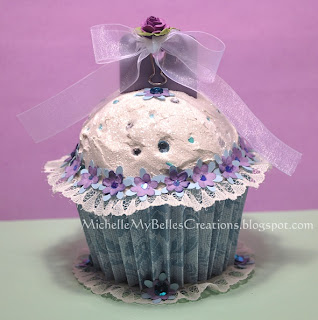 This is what I spent my weekend making!
I wanted to make one for my DIL’s birthday and finally found some links how to create one.
I came across a blog a while ago that had a cupcake tutorial, it was the cutest thing I had seen.  I never saved the page and could not find it. Then on Fri. I was catching up on Blog Posts and had seen that Lenae aka SugarGem  had made one of these cupcakes. She also had some links on her blog. So after more searching I was finally able to find it, Here.
I wanted to do something different, I hate duplicating someones work if I can help it. I wanted to make real icing, then decorate it. So, the only thing I could think to use was Spackle. So I went down into the basement and found some of Hubby’s Spackle. I used a knife to apply it. Up until this point I did follow the tutorial of cutting the ball in half, using Foam Adhesive to adhere the 2 halves together.
After applying the Spackle, it looked really nice. I put it in a tray to dry and added some glitter. I could not get the glitter to stick in one spot and made the mistake of picking it up. Being that I used the Spackle the ball was top heavy and it fell out of my hands and started rolling across my desk and picked up everything it touched. No laughing now!! So there went my pretty icing! LOL
I had already put so much time into making it, I decided to just go ahead and finish it even though my icing was now ruined. I did take some pics throughout the process using a different camera and will post them later.  I also added some Gems during this stage so they would adhered to the Spackle. 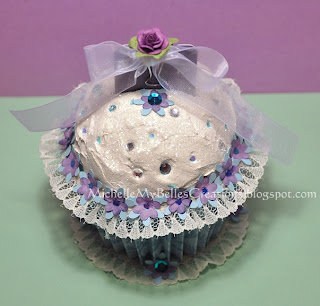 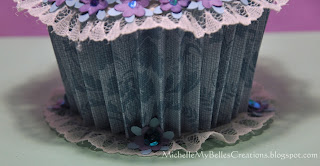 While different steps were drying I decided to search for more Links on this project. Now that I knew what to look for I found so many ways to make this cupcake, one also using Spackle and piping it. LOL. So I’m going to post a couple Links I found that may be useful in creating your own cupcake. I’m also going to try different techniques and definitely be making more of them!  All in all it turned out OK, not as nice as some of the Spackle Piping but it will have to do.

I hope you try and make one, they are a lot of fun.
Have a great day!
Michelle